Wa, (UW/R), Jan. 21, GNA – Professor Philip Duku Osei, the Vice-Chancellor of Simon Diedong Dombo University of Business and Integrated Development Studies (SDD-UBIDS), says the university requires an amount of US $100 million to help bridge the physical and electronic infrastructure gap of the university to cater for the growing students’ population.

He said the huge infrastructure gap and lack of seed capital to run the university were the two major challenges facing the institution, adding the university envisaged a student population of about 15,000 by 2024.

Prof. Osei was speaking at the SDD-UBIDS campus at Bamahu, a suburb of Wa, during his investiture as the first Vice Chancellor and the swearing-in of Mr Job Asante as the first Registrar of the university.

He explained that the university was aiming to be a great institution to provide transformational services to the public including research to provide advice to businesses, public administration, and civic institutions.

He indicated that the necessary structures had been put in place for the university to achieve its transformational agenda.

He added that the university had designed itself to be entrepreneurial focus to reap the benefits of human development in the shortest possible time. “Our intention is to create SD Dombo graduate who is exposed, analytical, critical thinker and employable.

“This is the reason why our academic board in 2021 created a student carrier guidance centre for our students to find the necessary tools to apply, learn and acquire skills”, Prof. Osei explained.

He indicated that the university was charted to operate as an internationally acclaimed institution and had thus put in the necessary structures including setting up a directorate of international collaborations to enable it to achieve the needed results.

The Vice Chancellor stated that the university was poised for growth and development through processes such as the establishment of four new schools; the School of Law, Education and Livelong Learning, Social Science and Arts, and Faculty of Information and Communication Technology, promoting academic excellence and creating a third-trimester programme of field training for the students among others.

Mr Kweku Yamoah Painstsil, the Chairman of the SDD-UBIDS’ Governing Council, who administered the oath to the two leaders of the university, expressed confidence in them to oversee the development and growth of the institution.

He commended the President for setting up the university to contribute to the development of the Upper West Region, and said it was a bold decision of the president to set up the university to make the region stand par with the rest of the country in all spheres of human life.

“This day also signifies an important milestone and a significant step in cementing the foundation of this great university laid by our visionary President Nana Akufo-Addo by separating or carving out this institution than a mere campus of the original University for Development Studies and conferring on it a charter to stand on its own as a full-fledged university”, Mr Yamoah said. 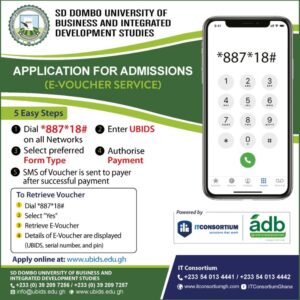